Greetings from the Land of Smiles!

This country with its wonderful beaches and islands in the south, with its forested mountains and multitude of rivers in the north and its enchanted and dazzling temples

throughout the land, draws around 15 million tourists each year.

Visitors are drawn to Thailand not only for its beaches, islands and mountains but also because it is, or gives the impression of being a very “laisser-faire” society, where everybody can do whatever they want and nobody will complain or bother them.

Thailand is however, apart from being the Land of Smiles, also the Land of of Illusions. It is in fact not a “laisser-faire” society at all, but a land of strict mores and customs and the longer you stay and the better a visitor understands the culture, the more they will understand that “laisser-faire” behaviour is not only unacceptable, but can well be offensive to local Thais.

One of the most important illusions is that of Thailand being a safe country, it is not and the issue of security is an ever-present need that is very rarely met. Security is seen, similarly to Life Insurance, something that one does not want and indeed will not spend any money to implement unless one has experienced a disaster or is convinced by a very good salesperson and/or security expert that it is in fact an essential part of everybody’s life, citizens, tourists and every business.

Thailand is a country of seeming calm and relaxation, what is generally not known 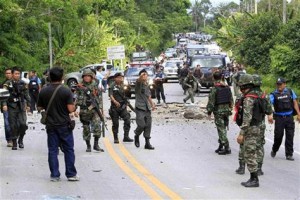 however is that there has been a Muslim insurrection which has been going on for over 100 years (with a dramatic rise in intensity over the past 20 years), with thousands of related murders and disfigurements.

Thailand is a land of 65 million citizens. The state religion is Buddhism. Buddhists make up 95% of the population. Muslims (Sunni) make up 4% of the population, of which over 80% live in the four southern provinces along the Malaysian border, the Greater Patani region (Satun, Yala, Pattani, Narathiwat)

Greater Patani (which converted to Islam during the 15th century) was an autonomous region until 1902, when subsequent to an agreement between Malaya (Malaysia), Great Britain and Siam (Thailand) it was divided up between Malaya and Siam, much against the wishes of the local Muslim population. The four provinces absorbed into Siam became a province that was under direct rule from the Bangkok government. Sharia law was abolished in1902 but Islamic law was restored to a large extent in 1945.

History shows the vacillation of the various Thai governments  over the past century, towards the four provinces has ranged from appeasement to vicious implementation of Thai wishes and back to appeasement.

One of the greatest challenges in implementing any form of security strategy in Thailand is the fact that the state religion is Buddhism, Buddhists making up 95% of the population. Perhaps the most striking aspect of Buddhism is the acceptance by Buddhists of matters and situations as they are and the related unwillingness of individuals and organizations to make or accept change as well as the unwillingness to confront people who are challenging the status quo or situations that develop despite the status quo.

Thus from the individual security guards up to senior government, police or military officers it is very rare that anybody will stand up and face evil or implement any action that will help to eradicate or even question that evil.

For those of us who love Thailand and who are able to recognize the situation, we have an obligation to make every effort to protect not only the 15 million tourists who visit the country every year, but also to protect each and every individual Thai citizen and resident from evil of every type.

We open our arms and welcome visitors to this Land of Smiles, our challenge is that we are also obligated to ensure that a psychology and understanding of security is implemented throughout the land, from top to bottom to ensure that we can face these challenges with the most formidable means at our disposal and with the help of those people and organizations outside of Thailand who understand how to deal with these challenges better than ourselves.

Mr. Philips is the Managing Director Asia Pacific region for Lotan HLS & Defense and the owner of Asia Hospitality Security.  Mr. Philips has held senior operational, marketing and management positions for key international industry leaders, including Four Seasons Hotels & Resorts, Le Meridien Hotels & Resorts and Raffles International Hotels & Resorts. is dedicated to the implementation of a security psychology and the related training, choice of technologies and implementation within the hospitality industry.