Posted on February 16, 2012 by Administrator

“India Today” reported on its website yesterday that the Indian authorities arrested five suspects for questioning in the attack on the Israeli Embassy in New Delhi, carried out on the 13th of February.

According to the report, while examining the security camera’s footage from the street where the embassy is located, the police in New Delhi recognized the face of a biker who attached the IED to the vehicle of an Israeli diplomat. The police also spotted a red motorcycle allegedly used in the attack. 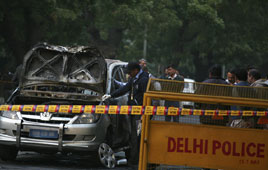 These findings are compatible with the “modus operandi” that the adversary and their agents have used for many years. We know that for over twenty years, terror groups have carried out well planned attacks following long periods of information gathering. This information is gathered over periods of time using well trained agents with the assistance of local operatives recruited to the cause. It should be noted that the attacker himself does not have to be part of the information gathering phase and can be a “fresh” face on the scene.

There are two options in dealing with this kind of terrorism:

1. Pre-emptive Intelligence: Receiving information indicating the intent to
carry out an attack, thus leading local agencies to mitigate or even fully stop the
attack before it takes place.

2. Pro-active Adverse Event Analysis: The use
of security personnel and security technologies deployed across cities,
identifying and documenting adverse events. It includes
examining the operational perspective and then deciding whether it is an unusual
event that should be dealt with or not.

Preliminary Conclusions
Following a short analysis of the attack, we can safely reach the following conclusions:

Lessons learned
In recent years the phenomenon of increased technological deployment around big cities has grown. Cameras are designed to provide information on adverse events occurring throughout the city. While providing this information has proved valuable for investigation purposes, they have in fact failed to provide real time information needed to stop the attack before it happens.

In order to maximize the technological capabilities and to be able to build system collecting and analyzing information that will allow the design of current intelligence picture, it is necessary to act as following:

Summary
Modern terrorism sets a major challenge for law enforcement agencies around the world. It should be noted that many terror attacks were not preceded by intelligence warnings due to lack of gathering capabilities or by lack of analytical processes.

In order that we are able to deal with future attacks on our cities we need to be able to analyze and disseminate information gathered by the Human and Technological aspect of our security deployment.

One Response to Analysis of February 13th attack in New Delhi