Posted on December 2, 2013 by Administrator

Crisis on the streets of Bangkok. Cancelled reservations. A fall of inbound tourism. Loss of revenue. Falling room rates. Thailand is rocked by political riots, let us consider another scenario………. 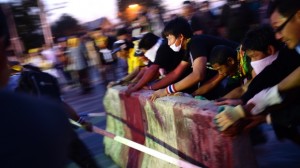 AK-47s crackling, grenades exploding and blood-splattered shoppers madly dashing for the exits. Mumbai or Nairobi? Yes, but not Siam Paragon, Emporium, Central World or any of Bangkok’s 5 star hotels. Or so we believe, until the day it actually happens.

It would not be difficult to launch such an attack in Thailand. One large heavy crate could hold all the arms and ammunition needed. Getting a dozen jihadists for a murderous suicide attack would be complicated, but Muslim extremists have been going off to wage jihad in Iraq, Lebanon, Afghanistan, Somalia and Syria for some time and we have an endless supply of home-grown volunteers in Yala, Narathiwat, Pattani and part of Songkhla provinces.

So let’s assume that a group of terrorists have just opened fire in Siam Paragon or a 5 star hotel. What next?

Police will rush in as quickly as they can with guns drawn. The tactic is hazardous for 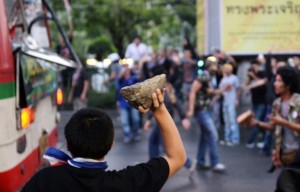 police but saves lives. So, running into one of Siam Paragon’s many entrances come two policemen. The terrorists in front of them have AK-47s, at least a dozen 30-round magazines, hand grenades and pistols. The two officers will probably die heroically and they may buy time for many people to escape.

The next two officers will be a minute later, one of the two will probably be injured, but they will probably hold the entrance open, allowing more people to escape. The terrorists will probably fall back from all entrances now and start grabbing hostages. Twenty minutes later, more officers will arrive, each with an assault rifle, a submachine gun or a sniper rifle and maybe 150 rounds each.

The policemen near the doors will be relieved as they are almost out of ammunition. The terrorists are nowhere near the exterior of the shopping mall and more people are able to get out, but it is soon clear that the terrorists have retreated to the interior with a large number of hostages. Attempts to probe the situation and push this interior perimeter will quickly result in more firefights.

The police around Siam Paragon will be stretched thin. Most have only a pistol and soon their ammunition will run low. Soldiers carry large supplies of ammunition; police don’t. No doubt reinforcements will soon arrive but the same problem would persist.

In Mumbai and Nairobi, around this time, military troops started to arrive. In Siam Paragon, this won’t happen. The nearest Thai infantry battalion is in the suburbs and is not fully up to strength nor is it prepared for civil emergencies.

The police around Siam Paragon are on their own and it may take days longer than it did in Mumbai and Nairobi to be ready to force a conclusion, as we witnessed during the Red Shirt occupation of central Bangkok in 2010.

By that time, in the interior of the mall, several hundred hostages will have been sorted out: Israelis and Jews for beheadings posted on Twitter, young women for rape and children wired to grenades for when the rescue attempt comes. Negotiations will be a gift of time for the terrorists to continue to build barricades and amuse themselves.

In the end, the interior will be set on fire and all of the hostages killed before the last of the terrorists push out against the encircling police to seek their own ‘martyrdom.’

There is no solution to this scenario, but there are simple measures that might be considered………. security awareness and intelligence to provide early warning and disruption of such a plot is our best defense. Aware, trained and astute staff, suppliers and guests are essential.

This is not a scenario anybody would hope for, but the nature of terrorism is to surprise and horrify. Attacks on shopping malls, hotels, hospitals and high-rise residences, allow terrorists to seize many hostages and control them. This is the ‘threat’ we must plan for.

This entry was posted in Uncategorized. Bookmark the permalink.

One Response to Crisis in Thailand