Could the clash between fans have been prevented?

Posted on December 11, 2013 by Administrator

I could not stay indifferent while watching the merciless violence between two groups of fans during the match between Atletico Paranaense and Vasco da Gama in Joinville, Santa Catarina, Brazil (8th December).

The videos, documenting the events as they occurred (17 minutes from match kickoff) were difficult to watch but also raised many questions in my mind regarding stadium security.
It was painfully apparent that too many minutes passed without adequate response from security forces and even then their reaction did not seem particularly effective…

During a period when all eyes are focused on Brazil as it prepares to host the World Cup in 2014, and while there may now be reason for concern after this violent breakout on Sunday, I personally wouldn’t go so far as to say that the preparation within the framework of the World Cup will be quite different.

However, let’s try to focus on this painful case and draw some lessons from it.
Intelligence & Evaluation of risks
In this case, the security forces are unable to explain the poor deployment due to absence of threat or lack of preliminary risk management. Both clubs have a history of violence and rioting fans.  It should be noted that Atletico PR were playing this game in a neutral venue, Joinville, as punishment for prior fan trouble at home…
Add to that the fact that the match was a fate sealing game that could have seen Vasco da 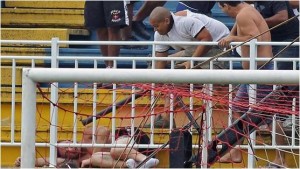 Gama downgraded to a lower league and you’ll get a recipe for a flammable situation.

Security Forces & Responsibilities
One of the questions that is often asked when discussing sports events security relates to the responsibilities of private security and official security forces. In addition, we must address the resources, skills and competency of local forces dealing with the existing threats.
These issues are now even more relevant after analyzing the deployment of forces in Joinville, Santa Catarina, on December 8th.
Analyzing public sources I am able to understand that local authorities in the state of Santa Catarina decided that the safety of spectators inside the stadium would be guaranteed by a private security firm hired by Atletico PR and not by the police, who were stationed inside. Law enforcement was to intervene inside the ground only if a “substantial risk” developed.
There is no doubt that the police response time was too long and carrying a cost in human life and property.

Another worrisome issue is why the security forces did not take care to produce an effective buffer between the fans of each club? A buffer zone is usually decided during the preliminary design phase of each security operation and takes into account the positions of fans, the area that should be allocated for effective separation, use of physical means for preventing this buffer from collapsing and of course the use of a trained security force that is capable of stopping rioters who try to violate public order.

In this case, the bottom line indicates that all the aforementioned security circles collapsed.

The private security guards, who were well prepared prior to the game, ran for their lives as soon as the violence broke out.
One may ask: Do private security personnel have the right skills, resources and authority to deal with such a violent event? Why police forces were not present in the stands to stop the hooligans from the beginning?
It is reasonable to think that presence of police forces in the stands may deter and prevent extreme fans to misbehave.

This distressing event raises many more questions about how local security forces (police) failed in preventing violence and maintaining public order – whether the amount of police manpower and composition were satisfactory? Where they well trained? Did the police use undercover forces among the fans? Was there any prior intelligence could have lead to identifying problematic fans in advance?  Did the police use security cameras to enhance collecting of information during the match And many more…

The game itself was stopped for an hour and 14 minutes and a helicopter had to land in the field in order to evacuate the wounded.

As a response to the event, FIFA President Mr. Sepp Blatter promised that the 2014 World Cup in Brazil will offer an enhanced security concept with cooperation between private companies and governmental agencies to protect fans and players participating in the event.
We all hope that the lessons from the incident in Joinville (and many other violent events) will be successfully implemented and allow us, the football fans, to enjoy the game and especially to return home safely!